Every kid needs a hobby.  For BJ it was between soap carving, beetle fighting, extreme ironing and magic. While it was a tight race, magic won! And while magic requires much practice and sharpening of skills, making people laugh has always come easy to him. Like many magicians, he sharpened his skills by performing close-up magic in restaurants yet soon went on to entertain casino, corporate and private event audiences.  He's been making appearances at the famed Chicago Magic Lounge since 2019.

When performing magic went from hobby to profession, BJ needed a new hobby. As he used to go to Pizzeria Due with fellow performers after gigs, he decided deep dish pizza making was to be that new hobby.  With the help of the chef at DUE's, a couple of professional chef friends, a renowned pizza chef in NYC (yes New York!) and his more than willing taste testing family and friends, he perfected his deep dish pizza recipe.

In 2014 while at a friend's house waiting for one of his pizzas to bake (deep dish takes about 35min), BJ began doing card tricks to pass the time.  On his way home that night he had is "AhHa!" moment and realized he could private chef dinner shows. Magic By The Slice was born!

In 2014 BJ donated Magic By The Slice as a live auction item. Having taught himself to chant like an auctioneer for theatrical purposes just a few years prior, he felt his donation could have raised more money. Soon after, he met someone who was in need of an auctioneer for her clients. While it took some time, he learned the ins and outs and his auctioneer career was born! Want Magic By The Slice as a live auction item for your benefit gala?  Click here
​So, what's he doing when not cooking and entertaining?  You might find him out running, riding his bike, making or eating pizza somewhere and watching his his favorite Chicago sports teams try not to suck! 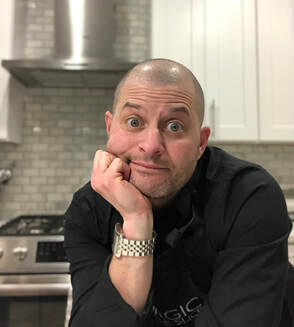